Elise Pickett is the owner and CEO of The Urban Harvest, an educational resource for people who want to start taking control of their food and where it comes from. Although she has been gardening with her father since she was a child, her journey to growing her own food as an adult began when she learned about our current food system and the impacts that it has on our health. Motivated to find an alternative way, Elise got her permaculture design certificate and continued her education taking classes on composting, worm composting, raising chickens, vegetable gardening, microgreens, and aquaponics.

In 2017 Elise volunteered on farms in South America to learn more traditional agricultural methods and merged them with modern urban agriculture approaches. This decades long education helped her launch the Urban Harvest in 2014 which has helped tens of thousands of people grow food organically and sustainably here in Florida. 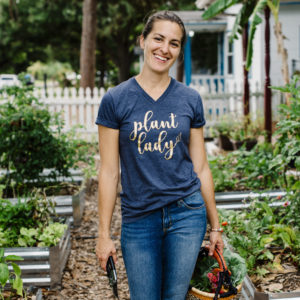